Use the Sympodium® ID350 and the Sympodium ID370 interactive pen displays, along with the many powerful features of SMART Board™ software, to control and write over computer applications.

The interactive pen display has three sets of buttons and indicators. A row of display control buttons fine-tune display properties. There is also a group of pen-tool buttons and a set of function buttons. The tethered pen acts like a mouse because it allows you to control your applications, but it also enables you to write or draw in digital ink over any application. The ID350 and the ID370 offer the same arrays of pen tools and function buttons. On the ID350 (not pictured), however, the display control buttons and the power buttons are on the top edge of the display rather than on the front. 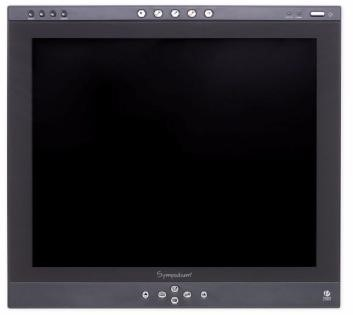 Checking the Status of the Interactive Pen Display

The function buttons provide quick access to a number of frequently used tools. Press a function button to launch the On-Screen Keyboard, the Floating Tools toolbar or the Capture toolbar. Open Notebook™ software to help you organize, save and share notes. There are two right mouse buttons to facilitate ease of use for both right- and left-handed users. 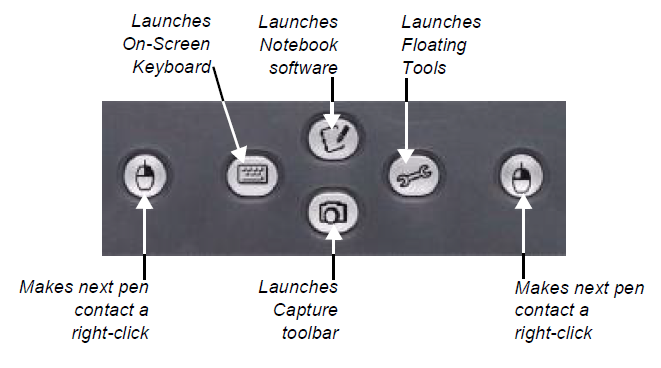 Use the pen-tool buttons to select a digital ink color, erase digital ink or return to mouse mode.

To write over your desktop image, pick up the tethered pen, press a pen-tool button to select your digital ink color, and write on the interactive display. Select another pen-tool button to change your ink color. To erase your notes, select the eraser, and move the pen in a smooth motion over your notes. Press the left mouse button to return the pen to mouse mode.

You can easily save notes on your Sympodium interactive pen display for future reference. 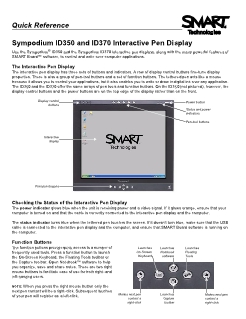